PC Games Hardware is the magazine of choice for IT, tech and game fans in Germany. The magazine sheds light on the complex world of computer hardware from the perspective of experienced PC users and is distinguished by its elaborate and well-researched product tests. PC Games Hardware currently has a print run of 25,300 copies. According to the German online research group AGOF, the publication reaches 4.03 million unique users per month (as part of the gamesworld.de network).

At the beginning of 2018, PC Games Hardware had largely separated the monetization operation of its print and online offerings. In the real world, readers are able to purchase each monthly issue of the magazine at their local newsstand or through an ongoing subscription. Online, PC Games Hardware earns its money by monetizing its reach. Separately, an e-paper connects the two offers - readers can purchase it either as a fixed subscription or on a per-issue basis.

For the print magazine, the editorial team publishes high-quality product tests that are based on several weeks worth of research. These are not, however, made accessible to readers outside of the e-paper, so they have only made a short-term contribution to the company’s success.

In the spring of 2018, PC Games Hardware decided it needed to better dovetail its existing channels and make them available to a broader group of readers, for a fee. This necessitated taking into consideration the characteristics of the publications readers: they are technically informed, educated and have grown up with the Internet - as a result, they have not only shown themselves to be skeptical about online payment offers, but are also capable of technically circumventing paywalls.

Phase 1: Getting used to - and testing - the paid offer

In February 2018, PC Games Hardware officially launched PCGH Plus, its paid content offering, which utilized the publication’s existing content and made it accessible to new groups of buyers. 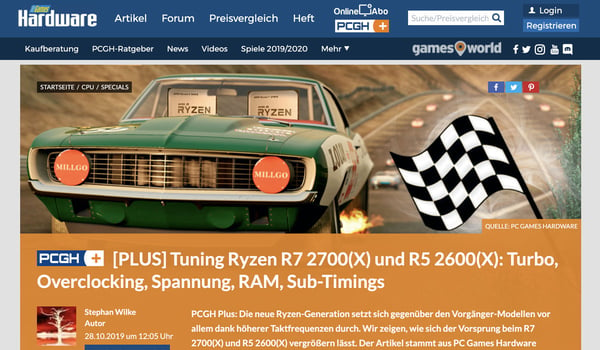 From the start, the new offering relied on LaterPay's proprietary payment technology. PCGH Plus provides online readers with high-quality articles such as hardware tests, elaborately researched background articles or special features, with one to two new articles appearing each day as paid content. The intention of this offering was above all else to convert readers who would not choose a subscription into buyers, thereby generating additional reader revenues. PC Games Hardware and LaterPay rolled out the payment options in three stages:

PCGH Plus was also integrated into the numerous distribution channels where PC Games Hardware offers its digital subscription.

Thilo Bayer, Editor-in-Chief of PC Games Hardware, reported on the first successes of PCGH Plus during its first few weeks: "Readers are now enjoying the benefits of being able to simply and easily buy high-quality individual articles from the print edition online. That became apparent after only a few days of working with LaterPay." 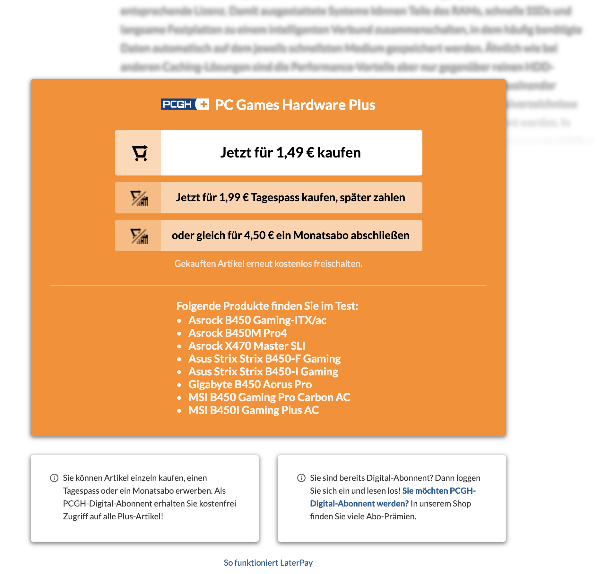 Bayer has received hardly any criticism of the new paid content offer. In the first six months of the cooperation, PC Games Hardware and LaterPay were helping readers get accustomed to the new payment offer, while at the same time the editorial staff was testing which articles reached a particularly large number of readers. "Of course, we've always watched exactly which posts click how well. But knowing which articles our readers are actually paying for is absolutely priceless insight. And not only for the online business, but also for our magazine," Bayer emphasized.

By November 2018, it was clear that PCGH Plus was being well received by readers and that they bought it repeatedly, and PC Games Hardware and LaterPay considered the familiarization phase to be complete. The goals for 2019 were to gradually convert individual purchase options to immediate payment (‘Pay Now’) and to increase conversions to longer-term models such as the monthly subscription option. Bayer’s editorial team leveraged LaterPay’s Business Intelligence service to analyze its purchase and payment options and test them for the best possible conversion rate. The team then set out to implement various changes:

Right from the start, the new offer from PC Games Hardware showed that even readers who do not want to take out an annual subscription are prepared to pay for high-quality content. Above all it showed that readers are attracted to low-friction offers like the single article purchases.

Between February and November 2018, this segment accounted for the majority of PCGH Plus sales. As of November, the share of monthly subscription would increase - supported by the price increases and the switch to the ‘Pay Now’ model. In May 2019, 50 percent of sales of the paid offer came from individual articles, and 50 percent from the monthly subscriptions. Looking at the overall distribution of sales from the LaterPay offers, a trend emerges: subscriptions are growing steadily and individual articles have reached a constant revenue mark.

Bayer’s team also achieved another goal: the LaterPay subscription brought other reader groups to PC Games Hardware. These users have not previously subscribed, but now more than 10,000 users have purchased content with PCGH Plus since its launch, of which around 5,000 have now registered with LaterPay.

These new buyer groups are gradually being introduced to long-term purchase options by LaterPay's multi-stage funnel model. The effect is outlined in the following diagram: while subscriptions as the sole purchase option stagnate in their growth, lower commitment offers generate growth and compliment subscriptions. 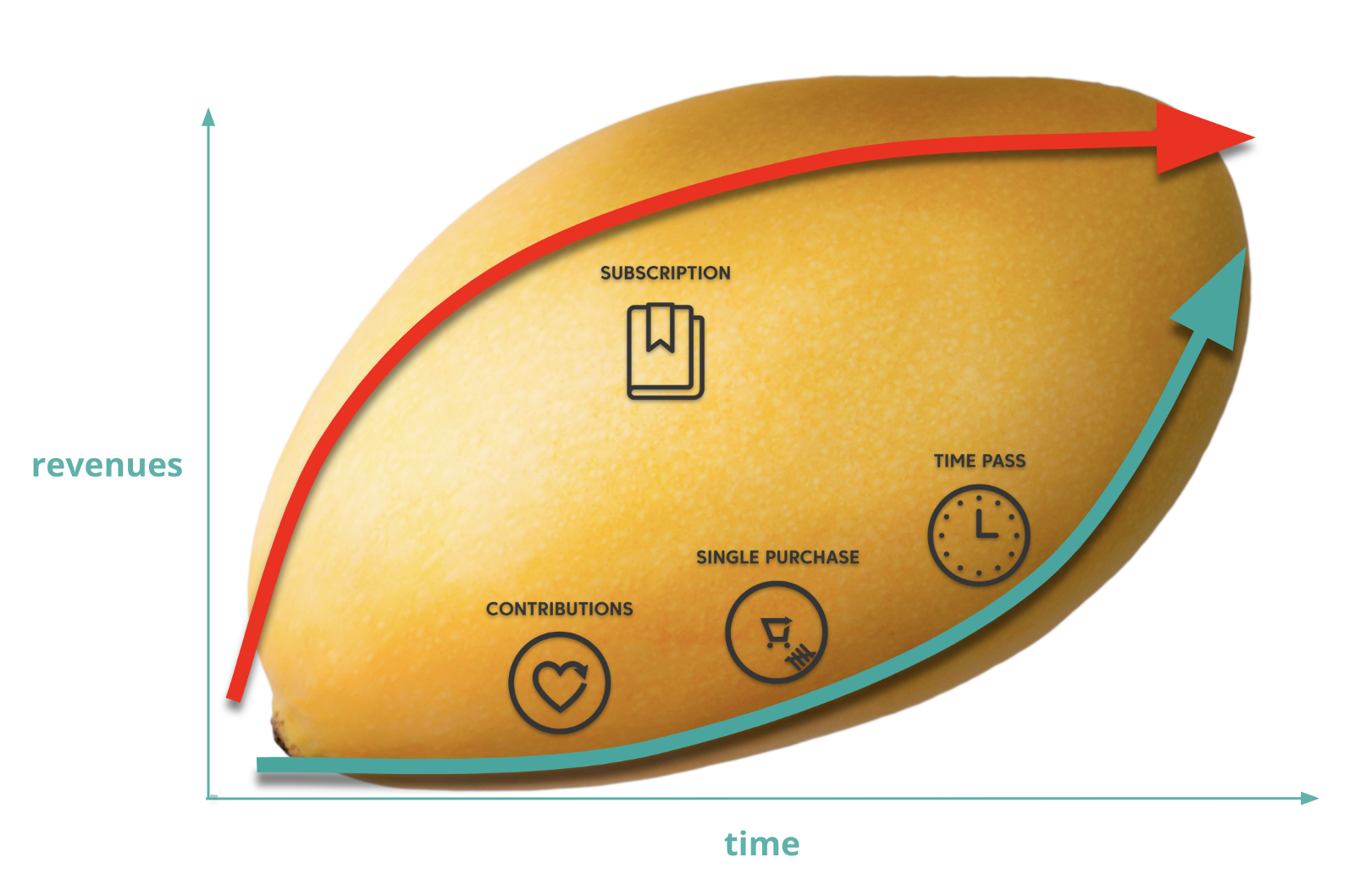 The latter can also be seen at PC Games Hardware. Not only are the individual article purchases developing positively, but also the various subscription models are developing in parallel. PCGH Plus is growing four times as fast as their traditional subscription offering. The reason for this might be the unique composition of the PCGH Plus content: even one year after the launch, they are still only selling articles that were previously published in the print magazine. Thus PCGH Plus digital subscriptions increased by 7.7 percent during the period of March 2018 to May 2019.

Thilo Bayer, Editor-in-Chief, PC Games Hardware: "The decision to choose PCGH Plus was definitely the right step for us and with the help of LaterPay we were able to put together exactly the offers that our readership still missed. The development of our subscriptions is the best proof of this. PCGH Plus and our digital subscription are the best developing products."

Cosmin Ene, CEO of LaterPay: "At a time when prestigious research institutions announce subscription fatigue and predict the further decline of the media industry, PC Games Hardware shows how a conversion funnel of single articles, time passes and subscriptions converts user into paying customers. The publisher generates valuable incremental revenue with PCGH Plus, increases subscription growth by offering single articles and even makes it possible for different subscriptions to grow in parallel. So there is no cannibalization of subscriptions - on the contrary, user-centered revenue models are paying off.”

Want to know how LaterPay can fuel your paid content strategy and increase your digital sales?