How do we introduce a payment model for the content on our website buchreport.de in addition to our existing subscriptions and extensive shop offerings?

Harenberg Kommunikation was faced with this question in spring 2017, when new revenue models for the B2B portal buchreport.de were being discussed.

In addition to its online presence and the weekly and monthly editions of the trade journal, the Dortmund-based publisher distributes a large number of digital and print products for the book and media industry, such as the well-known SPIEGEL bestseller lists, various rankings and analyses as well as webinars and customer magazines.

Initial situation and the decision for LaterPay

"In addition to minimal integration and operation efforts, the key requirements for the new paywall were a high degree of configuration flexibility and intuitive user guidance, which would make it very easy for our readers to buy," says Lena Scherer, editor in charge of buchreport.de.

In addition to the existing subscription offers, all content in the future needed also to be accessible to non-subscribers against payment. Conversely, existing customers would have access to all articles offered via LaterPay via login, without having to register separately.

Since the website buchreport.de runs on WordPress, the obvious choice was to use the LaterPay WordPress plug-in. The integration takes place directly from the CMS and requires no programming knowledge. The plugin can then be used to configure the entire setup within the WordPress interface.

"After the first year, we analyzed the development to date in a joint workshop with LaterPay and explored the potential for further cooperation. All stakeholders from editing, technology, sales and management sat at the same table and together created the basis for the further expansion of the paid service,” says Lena Scherer.

At the same time, the further development of the WordPress plug-in enabled new offer formats such as granularly configurable time passes, which include or exclude individual content from the offer depending on the setting. This means that low-cost time passes can be offered that cover a large part of the paid content, but not extensive analyses (e.g. "The 100 largest book publishers") or dossiers that are only to be distributed as subscriptions or in higher-priced retail sales.

After several tests with different time intervals, e.g. daily and weekly passes, the monthly pass for 39.90 euros was able to establish itself as a further offer format in addition to the single purchase option: 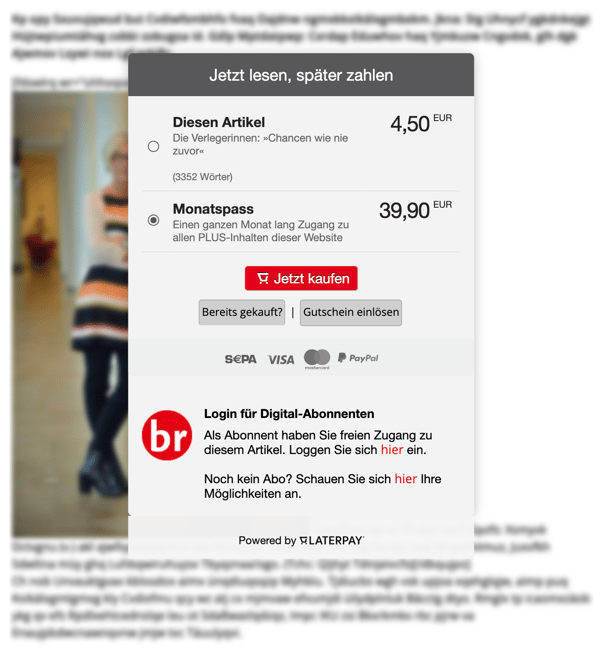 Thanks to the above mentioned optimizations and promotional/SEO activities, as well as the continuous increase in paid content inventory, the performance of buchreport.PLUS once again improved significantly in the second year:

A further advantage has been the increase in efficiency in buchreport sales thanks to automated sales processes through the connection to the LaterPay platform.

Early in 2019, the payment solution"100 largest book publishers" was developed for the database offer: since the publisher's dossiers are fed from a database, the LaterPay WordPress plug-in used for the web content could not be used here. Instead, the database was connected with the JavaScript connector of LaterPay. In this way, an annual access to the database was integrated into the offer and has recently been offered until the next comprehensive update is available.

Perspective and Development of Offer

What’s next for buchreport? "There are still numerous ideas for new products, product variants and bundles that can be implemented with LaterPay," says Lena Scherer and adds:

"Due to the positive development of the payable content offers and the good cooperation with LaterPay, we have also decided to integrate the payment system into our knowledge and training portal pubiz.de. In the future, we will offer our video content and webinars there via LaterPay, in which we provide specialists and managers with in-depth specialist knowledge about digitization in the book and media industry."

Get a free consultation today.