Welcome to the Mass Market: Cosmin Ene on Experiences with Paid Content in 2016

The market for paid content is on the move. The past year saw experimentation with novel approaches and the entire publishing world can benefit from these experiences. After all, from what we have seen so far, finding the right path for a media brand to develop a new and sustainable source of revenue based on paid content is never a single event, but a continuous learning process.

While classic subscription and paywall models have been represented in the market for some time, the past year has shown that paid content works well if content providers adapt their paid services to the consumption behavior of their users. Finding ways to build bridges in paid content means gaining significantly more customers. Internet users are ready to pay for exclusive content and will generate promising sales rates for content providers within months. However, Internet users are not prepared to rush into long-term commitments or sign a subscription right away.

The market for paid content is on the move. The past year saw experimentation with novel approaches and the entire publishing world can benefit from these experiences. After all, from what we have seen so far, finding the right path for a media brand to develop a new and sustainable source of revenue based on paid content is never a single event, but a continuous learning process.

LaterPay has been one of the market movers in 2016, launching in Germany and rapidly growing its client base to more than 100 content providers. Germany’s leading news website, SPIEGEL ONLINE, relies on LaterPay for its paid online service, SPIEGEL Plus, as do Frankfurter Rundschau and Bergedorfer Zeitung. Another paper, Hamburger Morgenpost, decided to stop using LaterPay after concluding that its readers were not willing to pay for quick, short texts to the extent envisaged. Overall, 2016 was a year of new momentum and budding success for paid content taking a user-centered approach. There are five experiences and successes that we take with us into this new year and which we would like to share with you: 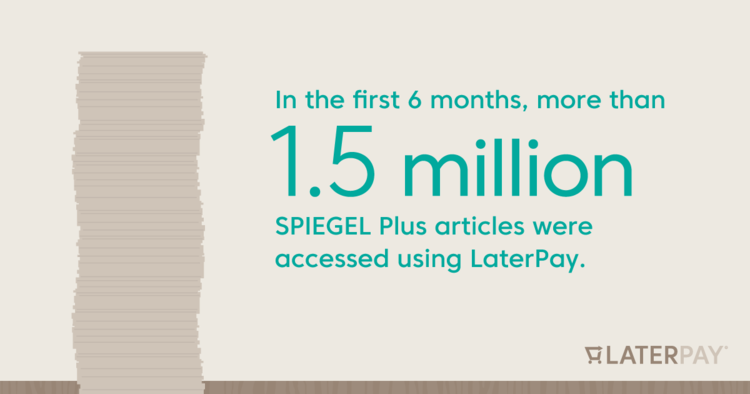 Hard paywalls put users on the spot: either pay right away or be excluded altogether. In 2016 LaterPay began offering users a low-threshold approach to paid content. Confronting the user with an online subscription and mandatory registration as the only option will not achieve the desired effect. A simple and short message on the digital ‘running tab’ combined with a low price, on the other hand, does provide an entry point that will drastically increase the size of the target group for paid content. For SPIEGEL Plus, this translates as follows: Within the first six months, more than 1.5 million articles were retrieved from SPIEGEL Plus via LaterPay. This is an impressive figure when considering the fact that it was achieved with just three or four paid articles on SPIEGEL Online per day. SPIEGEL Online’s stated goal of steering users toward paid services was thus achieved just months after the cooperation began.

2. CONVERSION FROM READERS TO “PAYING CUSTOMERS” IS WORKING

Mutual trust is the basis for a user-centric approach to paid content: the trust content providers place in their users that they are not out to digitally ‘dine and dash’ – and the users’ trust that they are purchasing content worth paying for. Irrespective of content type, from special-interest blog to high-reach news portal, we are seeing high rates of conversion. Over 80 percent of LaterPay users make a payment when they hit the five-euro mark. Providers who succeed in cautiously directing their readers toward paid content that is crafted and presented well, will be tapping into a newly developed source of income.

3. CHOICE IS REWARDED BY USERS

Users have different interests and needs, and therefore, there is no simple one-catch-all solution that content providers could resort to. Rather, we support our clients in setting up an individual conversion funnel. Here, unbundling content is a requirement that pays off. Across all LaterPay customers, 70 percent of sales are generated by single sales. This figure shows that users appreciate and reward having the option to very specifically choose the content they purchase. At the same time, time passes account for 30 percent of the generated sales. Users are far more willing to commit to media brands when they have been given the opportunity to first become acquainted with the content on offer.

Bergedorfer Zeitung increased its sales of Time Passes by 42 percent from July to November. Even content providers with an established subscription model in place should consider expanding their model with the sale of individual articles and time passes. Single sales enable them to generate additional, individual buying incentives and, in the next step, to convert casual customers into new subscribers.

4. DIALOG WITH USERS ON AD BLOCKERS PAYS OFF

LaterPay AdVantage allowed Gruner + Jahr to significantly reduce the percentage of ad blocker users on geo.de, schoener-wohnen.de and living-at-home.de in 2016. The ad blocker rate on the Gruner + Jahr websites decreased by up to 45 percent and resulted in a lasting recovery of advertising sales. Because the integration is fair and explains the content’s value and gives the user various options to unlock it, the measure was met with a high level of acceptance on the part of the readers. No negative effects have been observed since the system was introduced. There has neither been a substantial user reaction nor an appreciable drop in traffic on the sites.

5. EXPERIMENTING WITH DIFFERENT MONETIZATION APPROACHES IS WORTHWHILE EVEN FOR SMALLER CONTENT PROVIDERS

A multi-pronged monetization strategy can make the most of what is there and add value to the reader’s experience. Relying on diverse revenue sources, www.der-bank-blog.de tests a whole range of options in practice, from banner ads, sponsoring and affiliate links to entirely new concepts. For the past year and a half, the blog has been offering paid content through LaterPay and is in process of successfully establishing it as an additional revenue source. At this point, the Bank Blog achieves five to ten percent of its total revenue with individual e-book sales and Time Passes for studies. These are additive proceeds which augment the other monetization channels.

The market is beginning to stir, and paid content will continue to pick up speed and momentum in 2017. For publishing company decision-makers there is a widening field of possibilities to develop new, long-term income streams based on a user-centric integration of paid content. The lower the threshold of the payment system, the faster users can determine the personal relevance of the content.

In particular, it will allow providers that have so far relied solely on subscription models to exploit previously untapped customer potential within a short time frame. They can generate new income through individual sales, and additionally turn satisfied casual buyers into loyal subscribers.

We cast a keen eye on 2017, a year in which the paid content market especially in Germany and the U.S., will continue to open itself to the masses.