The Third Wave of the Internet

Data and privacy concerns may usher in the next evolution of the internet, one that gives users a choice and maybe even a cut

Starting in the late 1980s and ‘90s with the rise of Internet Service Providers, the commercial exploitation of the Internet laid the foundation for incredible progress in all our lives. This first wave of the Internet ushered in a new era, enabling new, varied means of communication – from email, to messaging, Internet telephone (Voice over IP), video calls, discussion forums, and the World Wide Web.

The second wave started around the year 2000 and it was all about sharing and networking. Once users mastered the first wave and the industry grew on top of the WWW, the need for organization became imminent. We needed to organize information, friends, and our digital lives. The vast amounts of information being shared – from text to pictures and video, streamed and on demand – were soon organized into online communities. This culminated in the sharing economy, which had ripple effects beyond the online world, enabling services as disparate as Airbnb and car sharing businesses.

Users have mastered the first two waves – communication, sharing and networking – and have now reached a stage at which they are aware of the side effects of some of the deals they entered into at an earlier stage.

The deal was simple: you allow internet companies to use data collected from your behavior on their site and you get free access to content. You never thought the data might be misused to such an extent that it would actually affect your life, or that you could be manipulated by companies focusing on exactly that: understanding your weaknesses, desires, consumption behavior and using this (against you).

Swarm intelligence is being turned by manipulative forces into swarm harm – harming the individual, harming businesses, and harming society as a whole. Many users are now aware of the downside of interpreting privacy too loosely. We are at the point at which users increasingly understand that we live in the age of influence, and that their user profile – their voice – matters. People are aware of the power of their digital voice and this awareness is laying the foundation for a third wave of the Internet.

An Internet of Choice

Now, 20 years later, the current landscape is nurturing a new wave of the Internet, a wave that acknowledges the user as a vital contributor to its existence and development. This next wave will inevitably be one which places users at its center and offers them a real choice. I am convinced that the next wave will allow users to choose for themselves – making content providers transparently communicate the benefits of their offerings and giving users a variety of options of how they want to pay for them. Pay with ads or pay with money.

You, the user, should have the choice to pay with your attention, pay by handing over pieces of your data, pay with money, or choose instead to get paid.

Yes, get paid. If users are increasingly becoming more considerate of their time and their own digital profiles, it may be time to pay them in return for being given access to both.

Walk with me for a minute.

The Internet That Give You a Cut

Imagine an Internet where consumers are reimbursed for sharing their digital profile or for spending time being exposed to brands and advertisements. Nothing has changed dramatically – it is still the same deal of give and take. But now the consumer plays an active role, versus passively being exploited.

How do you react to cold calls from people trying to get your attention or to sell something to you? I feel distracted and then angry that someone is stealing my time. I usually ask how they got my number and they usually hang up. Cold calling has become almost a guarantee for failing at something and also for getting people angry.

Looking at the conversion rates that we reach at LaterPay, with 82 percent of users keeping their promise to ‘pay later’ once they reach the threshold of $5, we realized that consumers are more considerate of their time than their money. Our success lies in saving users time and eliminating friction when purchasing digital goods and services by getting their consent to pay later and by letting them register and pay only once a threshold is reached. Clearly communicating to users what they will get; giving them the benefit upfront; and letting them pay later is essentially bringing an ‘IOU’ to the Internet. Being consequent and bringing what already works in real life to the Internet can’t go wrong. It essentially works like going to a sushi restaurant where you can eat as much as you like and pay once you are finished with your meal.

Now that users are increasingly becoming more considerate of their time and their own digital profiles, it may be time to pay them in return for being given access to both.

And here is how this will mend what’s currently perceived as ‘broken.’ A consumer who receives money, or loyalty points, or “something of a perceived value,” is going to show much more engagement and have a higher awareness for products and services which are being advertised or served to them.

Consumers not only make a massive contribution to the Internet as we know it, but they embody the Internet. Software has increasingly become a commodity – one that is only validated by how many users are actively using it. Thus, the value of the Internet now resides in the users who actively participate in it. Consumers are at last becoming aware of one thing: they are the product.

The third wave of the Internet will empower the rise of enhanced social media networks, communities, advertising models and business models which will give users a choice and let them even have a cut of it.

How might we see this playing out sooner rather than later? For social platforms like Facebook, which may soon be challenged to offer an ad-free subscription model to appease GDPR and address external political pressure, the most likely approach will be considering either monthly or annual subscriptions to help generate long-term revenue. As soon as the ad-free version becomes a revenue stream that needs to be maintained and grown, the platform immediately faces the exact same challenges facing the publishing industry today – how to convert “free” users into paying subscribers.

Facebook will need to consider a deferred registration approach, like that championed by LaterPay, in order to help transition users, offering not one “subscribe or don’t” option, but instead offering ad-free daily and weekly passes for users to test the new version, as well as options customized for specific content types, such as paying small fees to skip ads on a specific video.  The advantage of this approach will be that it offers users the sense of “choice” in the conversion process while simultaneously being proven to help transition a higher number of free users into paying customers and also already being compliant with GDPR and the increasingly complex international regulatory framework.

Getting Ready For The Third Wave

The Internet, now more than ever, is so ingrained in every aspect of our daily lives, with over five hours spent online each day on average. As our ‘digital lives’ and real lives become more in sync, we must adopt choice-based models for the Internet that we covet in real life.

Since LaterPay’s inception, we’ve always prioritized the need to place users at the center of everything we do. These everyday people will be core to the success of our business and they are fundamental for a truly democratized Internet. We at LaterPay are proud to be at the forefront of this digital awakening by pushing for an Internet of choice that empowers both content providers and consumers. We are part of the solution by providing essential tools for the Internet of choice. Our mission was and always will be to make it super easy and convenient for users to access content. Providing a running tab for all digital purchases across websites, currencies and platforms, and eliminating upfront registration and payment, is just the beginning. 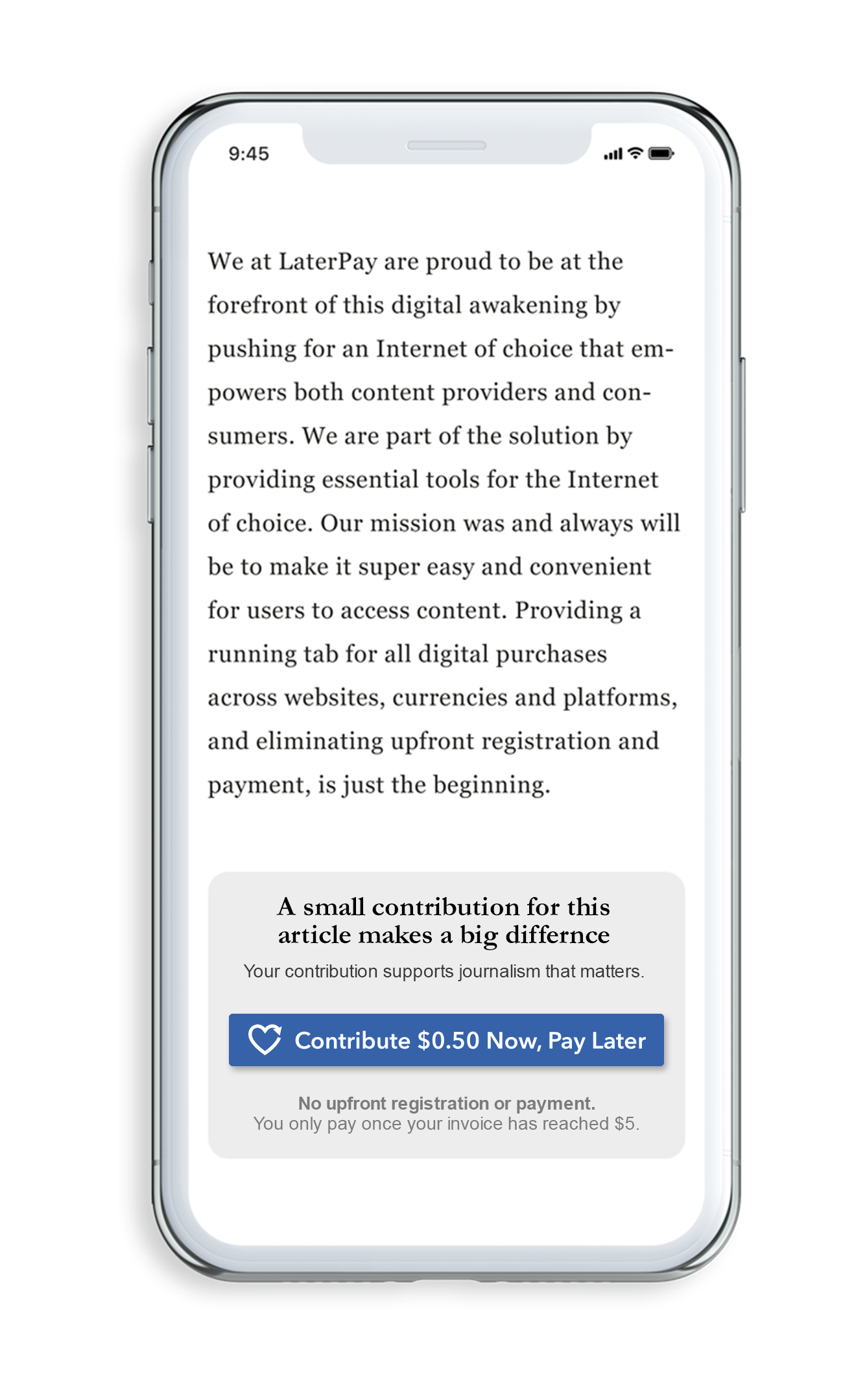