In the first part of this blog series, we discussed how “Geofencing” - the process of building a virtual perimeter for a real-world geographic area - could benefit local publishers who were looking to monetize audiences outside their immediate geography. Now let’s take a look at a second example - a much larger national publication. 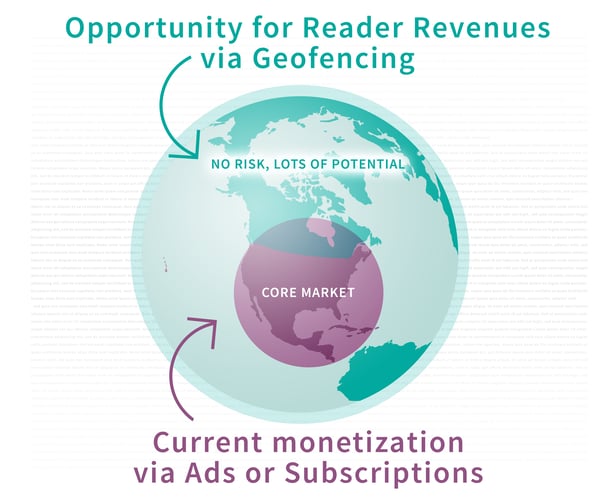 Scenario Two: National Publication with an International Audience Base

Let’s next consider a larger, national level publication that has a large audience base within the United States but also has solid readership internationally as well. While most publications at this level charge for subscriptions, the majority of revenue comes from advertising. However, with the exception of brands like the New York Times, the majority of publications do not monetize their ad inventory internationally - as a result the publisher is paid for ads seen in the country but does not collect revenue from ads that are seen anywhere outside the US.

In this instance, geofencing represents a huge opportunity, and one with which publishers have nothing to lose given that they are not taking full advantage of their international reach as it is. Once again, this is a chance for the publication to explore alternative monetization options, such as single articles or time passes - not only to offset the revenue lost from advertising but also to lead audiences through the conversion funnel, ultimately encouraging them to purchase a long-term subscription.

In this way, the outlet offers subscriptions to all audiences but relies on advertising as the primary revenue source within the US and charges for individual articles internationally as a means to build its subscriber base.

Geofencing is not a silver bullet to publishers woes when it comes to declining advertising revenue, but it is a new tool in their arsenal, one that allows them to segment audiences and employ multiple strategies to monetize content without alienating their readership base. Contact us to learn more about how LaterPay can help publishers of all sizes generate new revenue streams and grow subscriptions.